We march and chant: “Black lives matter! Trans lives matter!” My cis friend holds me and says, “I’m sorry we have to shout it in the streets that your life matters.” She knows what I feel, and I’m a white trans woman. Things are so much worse for sisters who aren’t white.

There’s a continuum, along which we all array ourselves, as to whether you are a human who can be loved. Judith Butler gets this when she asks: for whom can we grieve? And here we are, grieving together, saying the names of Black trans people murdered by the criminal justice system: Tony McDade, Layleen Polanco, etc.

There’s more to it, though. For whom can you feel not just grief, but also desire or love? Can trans women be loved? Not as often as we are desired, particularly by cis men. Even at my age, I get men sliding dick pics into my direct messages. We’re to be fucked, not loved. For love, we’re worthless.

Jamie Hood: “I’m exhausted trying to convince men of my personhood. It feels so much easier to lose myself in theirs. It is entirely possible that what I am actually seeking is only a codification of this necessitated nothingness… My expendability to men feels like a cellular disease; each day that I live with this feeling brings me into a further state of rot. I feel ruined in their fickleness.”[1]

There are trans women lesbians — transbians. That can be fraught in a different way. Men won’t fuck us unless we have dicks; women won’t fuck us when we do. Cis people really seem to think anatomy is destiny. Sure,“not all cis people.” It’s exhausting, though, just trying to figure out which.

Too often we’re an object of fantasy. With cis men, it’s nearly always a desire that’s to be kept secret.We remind them of the penetrability of their own bodies. It’s curiously inverse to the cis women who want to tell everyone about their trans friend (in the same way that white people like to mention their Black friend). It’s a prop to a fantasy that leaves no space for our own desires.

To be wanted as an object can be great, actually, if it’s what you want. The paradox of which is that you still want and are not entirely reduced to being someone’s plaything. To play at being the thing that another can have is one way of describing a femininity that could be a kind of agency, one that any kind of body could have.

For many trans women, paid labor is as rare as the love of men, and the only opening is as sex workers. Love is privatized and, as such, subject to a sliding scale of value. If you want to fuck one, you can just pay for a morsel of her time. We are exchangeable, interchangeable objects.

No wonder trans women so often end up with other trans people. T4T as we say: trans for trans. The mutual aid we practice together out of necessity can become love in all its senses. This doesn’t always work out. Precarious people are not always in the best position to love each other. T4T might still point in the right direction. What would it take to imagine a world that loves trans women? Maybe it has to be a world where all kinds of love are no longer such private affairs, transacted between individuals.

Charles Fourier: “The mistake of all the civilized philosophers is that they have always thought of love as something that must be limited to the couple. Necessarily, then, they have been unable to emancipate themselves from egoism, which is the inevitable result of amorous relations that are limited to the couple. If love is to be a source of generosity, we must base our speculations on the collective exercise of love.”[2]

This is not the free love of the ’60s sexual revolution. That seemed to be just the freedom of cis men to stick their dicks in any hole. It wasn’t the freedom of us holes to give ourselves to whomever we wanted. Nor was it the freedom of that other kind of receptivity, the body that makes itself emotionally vulnerable.

That would be a different kind of collective project. Let’s call it femmunism. The communal love of all femmes, of all whose agency is to open themselves to the otherness of the world. A love that is not limited to the two traditional destinies of the femme: as fallen woman or upwardly mobile saint. A love that is lateral, a sorority of those who have nothing to lose but their chains, and nothing to give but their availability.

What we took to the streets about, this May and June 2020, isn’t love — it’s hate. It’s the constant terrorizing of Black people by the police. On that, I just followed the lead of Black abolitionists who are out to end this racist, criminal injustice system. The end of state-sanctioned hate and violence calls for collective practices of love. On that, I learn from my transsisters, from the femmunism we already practice, in all but name. 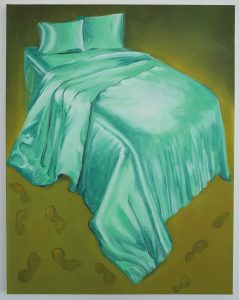