a chic young designer with an exuberant sci-fidelic vision — think jean-charles de castelbajac or thierry mugler on acid — charles de vilmorin offers a colorful escape from the fear and anxiety that’s plaguing us all. everyone in paris loves him already.

OLIVIER ZAHM — Let’s start with some references for talking about love. Places, faces…

CHARLES DE VILMORIN — Throughout my childhood, and in my life in general, what has evoked love most strongly for me is my family, my parents, grandparents, and great-grandparents — incredible couples who really built things together. My family provided a model that gave me faith in love.

OLIVIER ZAHM — Do you think your generation still sees value in love?
CHARLES DE VILMORIN — It certainly depends on whether or not you want to believe in it, but I think it’s still very present. For me, everything is based on love; two people in love can build anything and make something out of life together. It goes beyond generations and the zeitgeist. It’s lasting and essential.

OLIVIER ZAHM — Love is a creative construct for two?
CHARLES DE VILMORIN — I see it as a generative thing. There are many ways to love someone. It’s not necessarily the domestic model of the couple with children. A couple can be fertile in many ways — through artistic projects, through dialogue. It can take on very different forms. Then there’s also self-love, which is extremely important. There are people who build their lives through their work, who don’t need to be with someone else to grow and be fertile and creative. And that’s very beautiful, too. Love encompasses a lot of things, and it’s not necessarily only between two people.

OLIVIER ZAHM — So, self-love can sometimes replace the bond with the other?
CHARLES DE VILMORIN — For some people, it certainly can. People who are happy when they’re alone, who may be surrounded by friends, by people, but who don’t necessarily need to love anyone in particular.

OLIVIER ZAHM — Are you an enamored soul?
CHARLES DE VILMORIN — I’ve always had a very conflicted relationship to that. I’ve gone through different phases in my life. There have been times when I really needed to be alone. I didn’t need anyone to get ahead. At other times, I’ve felt the desire to build something. I definitely want to follow in the footsteps of my parents, my grandparents. My parents, who are very happy, want us to have what they have. They think that their way of life is the most appropriate one, even if that’s not necessarily the case. You have to be able to break free from that. You have to know how to live your own way.

OLIVIER ZAHM — Are you related to Louise de Vilmorin?
CHARLES DE VILMORIN — Yes, she’s a great aunt on my grandfather’s side. She had an idea of love that was very unique and personal. She loved men very much, she had many men in her life, but she was always very independent, and she didn’t need anyone to get things done. She was very avant-garde in that respect. She was a feminist and had ideas that were quite unconventional at the time.

OLIVIER ZAHM — Does your family influence you creatively?
CHARLES DE VILMORIN — My family heritage is ever-present and inspires my sketches, patterns, colors, and flowers a great deal. Initially, de Vilmorin was a family of botanists. I’ve always included a lot of flowers in my work. Even in my silhouettes, in general, there’s a rather sophisticated quality. I try to strike the right balance between this classic, fashion — even high fashion — heritage, and something contemporary, of the present.

OLIVIER ZAHM — Based on comics and vampire films?
CHARLES DE VILMORIN — Yes, it’s very influenced by that. Not so much by comics, but by a lot of fantasy films and music. Those are my two main sources of inspiration.

OLIVIER ZAHM — Because behind this woman, this colorful plant woman of yours, there’s a certain kind of madness.
CHARLES DE VILMORIN — Yes, that’s part of it. I love people who exude something singular. I like mystery. I like women who are very difficult to grasp, who don’t reveal everything, who are inaccessible. I think it was Alexander McQueen who said he liked it when a woman came into a room and frightened him. I’m into that, too. I like it when it’s disturbing…

OLIVIER ZAHM — Aren’t you afraid of going too far?
CHARLES DE VILMORIN — No, on the contrary. I think in order to say anything today, you have to push the limits. You have to go all the way, and even if it’s over the top, it’s never too much. Especially when we make clothes, sketches, photos. There are other jobs that are better suited to tiptoeing around things.

OLIVIER ZAHM — Some compare you to a young Jean-Charles de Castelbajac.
CHARLES DE VILMORIN — Jean-Charles de Castelbajac was the first to support me. When I was in my first year at the École de la Chambre Syndicale de la Couture Parisienne, I got in touch with him by e-mail, or on Instagram, and he immediately welcomed me with open arms. He has always been very supportive. It means a lot to me because he’s an artist whom I admire, especially for his relationship to primary colors. And indeed, I recognize myself in him. He’s talked about me in a few articles, podcasts, or on Instagram, and each time he concludes by saying that I remind him of himself when he was my age. Then, of course, Alexander McQueen. He’s also been an important influence! But that’s another era. I don’t feel like I have to make things the way he did for them to be beautiful because that was really a different time. I don’t need such emphatic staging anymore.

OLIVIER ZAHM — Or theatricality.
CHARLES DE VILMORIN — Exactly. Even though I find it sublime and inspiring,
I think that today we need to go straight to the point and do things that are more raw, without all that mise-en-scène and spectacle — which I love, by the way, and will experiment with one day.

OLIVIER ZAHM — What lessons have you learned from Alexander McQueen?
CHARLES DE VILMORIN — He took every possible risk. Whenever he felt like doing something, he would do it. He wasn’t afraid of the fallout. He didn’t care. I find that absolutely brilliant.

OLIVIER ZAHM — There’s a punk side to it, too.
CHARLES DE VILMORIN — Of course! There’s a punk side even to Jean-Charles de Castelbajac, with his connection to Vivienne Westwood and Malcolm McLaren. I love punk, but I don’t say to myself: “Oh, I want to do something punk. Let me add nails everywhere and tear up some jeans!” The process has to be genuine, or else it’s not punk — it’s just ridiculous.

OLIVIER ZAHM — It’s more of an attitude.
CHARLES DE VILMORIN — Yes, absolutely. It’s one of those movements that had such a deep impact on the history of fashion, that was so inspiring, inspired, and widespread. I think that today, if we want to take up that style again, it has to be in a new and genuine way. These may be very inspiring trends, but they have to be repurposed and presented in a way that feels natural. Otherwise, I have a problem with it.

OLIVIER ZAHM — Is it fair to say that love influences you: your love of plants and women, their superiority and sense of mystery?
CHARLES DE VILMORIN — Mystery, that’s the word! More than superiority. Attitude, mystery, coldness, even though this collection is more joyful…

OLIVIER ZAHM — Does a particular woman like that come to mind?
CHARLES DE VILMORIN — Yes, Tilda Swinton inspires me enormously. I have a passion for Isabelle Huppert. She’s exactly the type of woman who inspires me. I mean, she’s so cold and secretive that she becomes endearing. As soon as you glimpse a part of her that escapes her or that she doesn’t control, she becomes incredibly present. 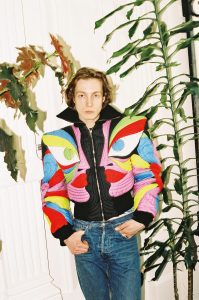